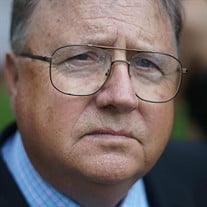 Memorial services for Wayne Elmore LaMunyon will be 2:00 p.m. Monday, August 12, 2019, at the New Song Church in Waynoka with Pastor Jeremy Coolley officiating. Arrangements are under the direction of Marshall Funeral Home of Waynoka, LLC. Wayne Elmore LaMunyon, son of the late Archie Elmore and Eva Jaunita (Fisher) LaMunyon, was born August 5, 1943, and passed away on his birthday 76 years later. Wayne, also lovingly known as Papa Wayne, graduated from Buffalo High School and attended NWOSU where he studied engineering. He worked in radio broadcasting over 30 years and also did football play by play. He started his broadcasting career in Alva, then worked several places in Kansas, and finally moved to Enid where he worked until his retirement. In 1989, he was united in marriage to Jamie Sue Jameson in Enid. They moved to Waynoka about 13 years ago when he opened the Waynoka Sign Shop and helped his wife, at Miss Jamie’s Malt Shop. Wayne was a member of the Disciples of Christ Church in Enid and the New Song Church in Waynoka. He was also a member of the Enid AM Ambucs. He was always very involved in his church and in the communities he lived. Besides his parents, he was preceded in death by his sister, Jaunita Kinzer and husband, Wally, and their daughter, Nita Lou; her brother-in-law, Roy Hoover; and his sister-in-law, Cindi Broaddus. Wayne is survived by his wife, Jamie, of Waynoka; one son, Griff Gurwell and wife, Sharon, of Kansas City; four daughters, Jill Kennedy and husband, Bryce, of Enid, Angie Sanderlin and husband, Darrell, of Oklahoma City, Jennifer Gurwell of Honolulu, Hawaii, and Dawn LaMunyon of Cibalo, Texas; two sisters, Linda Hoover of Buffalo and Margie George Scott of Silver City, New Mexico; 10 grandchildren; 5 great grandchildren; other relatives and many friends. Memorial contributions may be made through the funeral home to St. Jude Children’s Hospital.

Memorial services for Wayne Elmore LaMunyon will be 2:00 p.m. Monday, August 12, 2019, at the New Song Church in Waynoka with Pastor Jeremy Coolley officiating. Arrangements are under the direction of Marshall Funeral Home of Waynoka, LLC. Wayne... View Obituary & Service Information

The family of Wayne Elmore LaMunyon created this Life Tributes page to make it easy to share your memories.

Memorial services for Wayne Elmore LaMunyon will be 2:00 p.m....

Send flowers to the LaMunyon family.