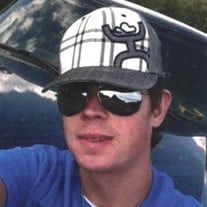 Memorial services for Wesley Alan Hood will be 2:00 p.m., Friday, November 17, 2017, at the First Baptist Church in Waynoka with Pastor Brian Holland officiating. Wesley Alan Hood, son of Mike and Christy Jo (Sreaves) Hood, was born April 21, 1997, at Joplin, Missouri, and passed away November 13, 2017, at the age of 20 years, 6 months, and 22 days. He attended elementary school in Fairland, Oklahoma, before moving with his family to Waynoka where he graduated from Waynoka High School. He worked as a mechanic at Hoskins Trucking and Construction. Among his favorite things to do was bull riding and spending time with his friends. He was the type of person that would give you the shirt off of his back. Wes was a kind gentle soul and was loved by so many. Wes is survived by his parents, Mike and Christy Hood of Waynoka; his sister, Paige Hood of Waynoka; his grandparents, Tony and Kathy Lambeth of Carthage, Missouri, and Steve and Connie Sreaves of Waynoka; aunts, uncles, cousins, other relatives and friends. Memorial contributions may be made through the funeral home to the Oklahoma Suicide Prevention Council.

The family of Wesley Alan Hood created this Life Tributes page to make it easy to share your memories.

Send flowers to the Hood family.