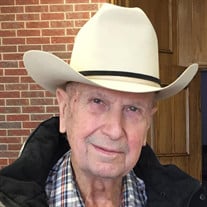 Memorial services for Wesley Eugene Matteson will be held on June 30 at 2:00 pm at the Mooreland United Methodist Church, Mooreland, OK under the direction of Marshall Funeral Home. Cremation has taken place. Wesley Eugene Matteson was born February 11, 1933, North of Quinlan, Oklahoma and went home to be with his Lord on June 20, 2020, at his home in rural Major County, OK. surrounded by family and friends at the age of 87. He was the only child of Elden Daniel Matteson and Lola Alberta Dauphin Matteson. Wesley grew up on several different farmsteads in Woodward county. He attended a one room schoolhouse, Plainview school near the Selman place where they moved in 1942. He attended Quinlan Schools in which he played basketball and baseball and graduated in 1951.It was in high school when he started roping calves with his mother's younger brother, Chet Dauphin. It wasn't long before the two were traveling and rodeoing together all over Oklahoma, Kansas and Texas. He won his first buckle at Canadian, Texas in 1953, and won many buckles, saddles, and go-rounds over the years. Two of his other traveling companions and good friends were Jack Morris of Waynoka and Dale Johnson of Clinton, Ok. Wesley started as a substitute mail carrier for Lawrence Romine out of the Quinlan Post Office in 1953 and then moved on to Mooreland as a substitute when the Quinlan Post Office closed. He did go to work full time for the Mooreland Post Office and retired after 40 years as a rural carrier. He was proceeded in death by his parents Elden and Lola, one son-in-law, Mike Meek. Wesley married Joyce Lee Johnson of Belva, OK on April 5, 1953, they started their family and built a large cattle ranch and wheat farm over the years. He is survived by daughter, Susan White, Medicine Lodge, KS; her son Scott White (Mary) and grandchildren Aria of Camano Island, WA Aurora of Lawrence, Ks; and Matteson of Woodward, OK; daughter, Deana Mauck (Garin) and grandchildren Logan and Megan of Hinton, OK. and daughter Diana Arensdorf (Brian) and grandchildren AJ and Olivia, Pratt, KS Lee Ann Meek, Waynoka, Ok; and her daughter, Neta Copenhaver (John) and grandsons Dakota and Dallett and her son John Stine II and grandsons John Stine III and Hunter; LaDeana Cummins (Marty), Norman, OK; and her son Joshua (Stephanie) and grandchildren Marlo and Brody and her daughter Madalyn Cummins-Bright (Nathan) and grandsons Owen and Luke ; and son Wesley Dean Matteson (Sherrie) Mooreland, and his daughters Katelyn Matteson-Athem (Cody) and grandsons Kasen and Klyde and Tanna Hepner (Jesse) and granddaughters GraceLynn and Nora. In lieu of flowers, memorial contributions may be made through the funeral home to the Waynoka Senior Citizen’s Center.

The family of Wesley Eugene Matteson created this Life Tributes page to make it easy to share your memories.

Memorial services for Wesley Eugene Matteson will be held on...

Send flowers to the Matteson family.