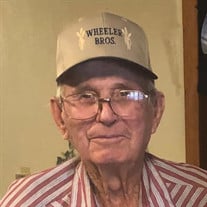 Graveside services for Willard Dean Nusser will be 2:00 p.m. Wednesday, February 3, 2021, at the Alva Municipal Cemetery with Sherry Shklar officiating. Interment is under the direction of Marshall Funeral Home of Alva. The service will be livestreamed over the Marshall Funeral Home Facebook page. Viewing will be Sunday January 31, 2021, from noon to 7:00 pm, Monday and Tuesday 8:00 am to 7:00 pm and Wednesday 8:00 am till 1:00 pm. There will be a visitation with family present Tuesday 5-7pm. Willard Dean Nusser, son of the late Charles Alvin and Ada (Morse) Nusser, was born March 29, 1930, on a farm west of Dacoma along Eagle Chief Creek and passed away January 29, 2021, at the age of 90 years and 10 months. Dean lived his entire life in Woods Co. After his birth the family moved to the farm SW of Hopeton where his Grandfather Christian Nusser homesteaded. Dean attended school through the eighth grade at Friendship School, which was located across the road from the farm. He then attended school at Dacoma High School until he graduated in 1949. He was an excellent basketball player and even won a basketball scholarship to Northwestern College in Alva, which was an extremely rare occurrence in those times. However, he was unable to attend college due to his father’s failing health. On December 29, 1950, he married Patty Lakely. They were blessed with three children: Carolyn, Doyle and Dale. After their marriage Dean and Patty lived with his parents where he continued to help out on the farm and also worked at Clyde Hall’s Phillip’s 66 Station. About a year later he moved his family to a farm that belonged to Bill Haltom and was located about two miles south of Hopeton. He farmed for Bill and milked the dairy cows. In 1953 he borrowed a combine and truck and went on wheat harvest for the first time. During the fall and winter of that year he worked for Santa Fe Railroad on the bridge gang until he suffered an injury to a hand. Dean continued going on harvest in the summers and working in various jobs in the winter. Some of those jobs were working for Ralph Zook in Ralph’s garage in Waynoka then later for Lumpkin Ford in Waynoka. Dean learned how to repair electronics by taking a correspondence course by mail. He would make house calls during the winter months to repair tvs and radios but would occasionally bring them home. In 1955 he bought his first combine, and a few years later he began taking his family with him on harvest. In early 1960 Dean began doing his own farming and raising of cattle in addition to the wheat harvesting. He retired from custom wheat and milo harvesting in 2001 but continued to farm and raise cattle up until his passing. He mentored many young men through the years at harvest time. Dean believed in hard work no matter who you were working for. He instilled this belief in his children. Work was always a priority but he also knew how to have fun. Dean spent his leisure time with his family either playing croquet, softball, basketball, ice skating on the pond and creek in the winter and swimming in the pond in the summer, izan glass hunting, searching for the perfect Christmas tree in the pasture, fishing, sight seeing, visiting the mountains in Colorado, having family get togethers, enjoying his grandchildren or just sitting in his chair reading the mail. He would take his grandchildren sparrow hunting at night by shining a flashlight above their heads in the trees to locate the birds. He also taught his children how to walk on big wooden spools, walk on stilts that he made, play tag in the rafters of the barn and the limbs of the big native elm trees and how to hunt and identify rocks. Dean was a self taught pro on the harmonica never receiving any lessons and playing only by ear. He always said that if he could get the tune in his head then he could play the song. It was a joy to listen and watch him play, while he sat in his recliner, and moved his toes to keep time. He would occasionally surprise Patty with a bouquet of wildflower, native grasses or other items from nature he thought she would enjoy. He was also not beyond a little mischief making or teasing. Dean is preceded in death by his wife, Patty; his son, Doyle; one grandson, Ricky Baird; his parents; four brothers, James (Jim), Harlin, Alvin (Bud), and Alan; three sisters, Evelyn, Ann and Mary; eight brother-in-laws and seven sister-in-laws. Dean is survived by his daughter Carolyn and husband Rex Ivan Baird of Waynoka; his son Dale and wife Brenda of Alva; a daughter-in-law Jean Ann Nusser of Alva; one brother Charles and his wife Judy of Alva; two sister-in-laws, Leota Nusser of Alva and Kathy Holt of Kiowa; two brother-in-laws, Doug Lakely and wife Janet of Alva; and Dennis Lakely of Enid; five grandchildren, Sherry Shklar and husband Michael of Waynoka; Shannon Nusser and wife Heather of Alva; Carissa Nusser of Alva; Shelley Reidy and husband Marcus of Edmond and Derek Nusser of Alva; 14 great grandchildren, one great-great granddaughter and a host of nieces, nephews and other relatives and friends. Memorial contributions may be made through the funeral home to the NWOSU Foundation.

Graveside services for Willard Dean Nusser will be 2:00 p.m. Wednesday, February 3, 2021, at the Alva Municipal Cemetery with Sherry Shklar officiating. Interment is under the direction of Marshall Funeral Home of Alva. The service will be... View Obituary & Service Information

Graveside services for Willard Dean Nusser will be 2:00 p.m....

Send flowers to the Nusser family.