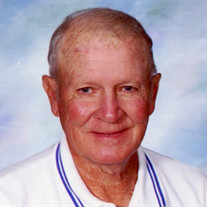 Memorial graveside services for William E. “Bill” Balcom will be 11:00 a.m. Tuesday, December 12, 2017, at the Alva Municipal Cemetery with Derrick Thomas officiating. Arrangements are under the direction of Marshall Funeral Home of Alva. Immediately following the service, there will be a fellowship with the family at the First Baptist Church. William E. “Bill” Balcom was born to Charles and Nila Balcom on December 20, 1935, in Sand Springs, Oklahoma. He passed away December 3, 2017, at Tulsa, Oklahoma, at the age of 81 years, 11 months, and 13 days. At ten years of age, Bill moved with his parents to Long Beach, California. He excelled in all sports at Long Beach Polytechnic High School, and upon his graduation was granted a football scholarship at Oregon State. He played Professional Minor League Baseball with various teams before deciding to come to NWOSU in 1958. He played football for Art Parkhurst before being ruled ineligible due to his former professional affiliation. He continued his education at NWOSU, graduating in 1962. In 1959 he married Sharon Hackney and they had two daughters, Traci and Terri. In 1984 he married Joy Johnson. Bill and Joy lived in and around the Tulsa area for most of their married life. He recently retired and continued to live in Tulsa with his wife, Joy, and his mother-in-law, Rose Hefley, who was very dear to his heart. Bill’s passion was coaching and especially, football. He began his career in Little River, Kansas., moving later to La Crosse, Kansas. From there he went to Artesia, New Mexico where he coached with John Welborn. John and Bill coached side by side for many years including Shawnee, Oklahoma and Pampa, Texas. Bill also coached several places in Oklahoma, including Alva, Hennessey, Crescent, Westville, Salina, Wagoner, Berryhill, and Kingfisher. In Kingfisher, he coached with his grandson, Taylor Schwerdtfeger. Besides his parents, he was preceded in death by his daughter, Terri Balcom Wiersig; and his brother, Steven Balcom. Bill is survived by his wife, Joy, of Tulsa; his mother-in-law, Rose Hefley of Tulsa; his daughter, Traci Balcom Wynn and husband, David, of Alva; his grandchildren, Taylor Schwerdtfeger and wife, Jill, of Alva, Wade Schwerdtfeger and wife, Hayley, of Oklahoma City, ShaLyn Melvin and husband, Matt, of Kingfisher, and Lane Wiersig of Alva; his great-grandchildren, Ali and Kodi Schwerdtfeger of Alva, and Matthew Schaefer of Kingfisher; his son-in-law Doug Wiersig of Alva. He is also survived by his stepchildren and grandchildren, Dana Whatley Harris, Josh and Dustin, and Brett and Sara Whatley, Kay, Cameron, Kevin and Clara; other relatives and many friends. In lieu of flowers, memorial contributions may be made through the funeral home to the Alva Goldbug Educational Foundation (check must be made payable to Communities Foundation of Oklahoma) or the NWOSU Foundation. Bill will be missed by his family and many friends, coaches and players.

The family of William E. "Bill" Balcom created this Life Tributes page to make it easy to share your memories.

Send flowers to the Balcom family.