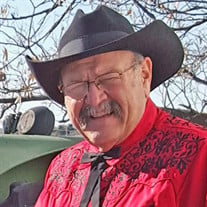 Memorial services for William Otto Beard will be 11:00 a.m. Tuesday, September 4, 2018, at the Driftwood Christian Church with Rev. Eddy Bob Mathews and Mark Berry officiating. He was cremated at his request and there will be a visitation with the family from 2:00 p.m. to 4:00 p.m. Monday at Marshall Funeral Home of Alva in Alva,Oklahoma. William Otto Beard, 63, of Ponca City, Oklahoma shed his wheelchair and walked into eternity with his Lord on September 1st, 2018 in Oklahoma City, Oklahoma William was born November 8, 1954 in Cherokee, Oklahoma to the late Billy Virl and Evah Mae (Hill) Beard of Amorita, Oklahoma. William grew up and attended grade school in Amorita, Oklahoma and graduated from Burlington High School in Burlington, Oklahoma. He married Patti Jo Clark on August 9, 1975 in Byron, Oklahoma. Bill and Patti started their life together living outside of Byron, and Bill’s life was characterized by a strong work ethic as he provided for his family through demanding jobs as a heavy equipment operator, welder, public utility worker, facility maintenance, and many other jobs where his skill, strength, and ingenuity were put into action. After a couple of years in Byron, Bill and Patti moved to a small farm outside of Cherokee where in addition to his regular employment Bill raised sheep and other animals. After a few years, Bill moved his family to Alva, Oklahoma where he served as a volunteer firefighter and a city councilman. In 1994, Bill experienced a spiritual transformation in which God led him back to church, where he became extensively involved as a deacon, teacher, and youth group volunteer. In 1999, Bill answered a life-changing call by God to enter into the ministry; by faith he quit his job and moved to Joplin, Missouri to attend Ozark Christian College where he graduated with a Bachelor’s of Biblical Literature. Bill and Patti served several churches in Missouri and Oklahoma until Bill retired from ministry in 2015 in Ponca City. Bill and Patti moved to a small farm north of Ponca City in which they raised goats and other animals. Bill returned to working as a welder, and then as a heavy equipment operator for Kay County where he worked until an automobile accident left him paralyzed in December 2016. Bill was a multi-talented man who could fix anything that was broken, cook anything in dutch oven over an open fire, play any instrument that had strings, and sing any country western song that was worth singing. Bill provided unmeasurable joy to people by playing music in all sorts of venues; churches, nursing homes, garages and barns echoed with the sounds of his guitar, bass, fiddle, and steel guitar, and countless couples danced the Texas Two Step while Bill bellowed out a classic country song. Bill loved the outdoors a lot and his family a whole lot more, and the highlight of his year was the Beard Family Deer Camp, where Bill served as chief cook and storyteller. William was preceded in death by his parents and his sister Luanne Boham. William is survived by his beloved wife Patti; his son Christopher Beard and his wife Kerri from Lumberton, Texas; his daughter Lindsi Stidham and her husband Randy from Rogers, Arkansas; his son Matthew Beard and his wife Sarah from Brandenburg, Kentucky; eight grandchildren: Nathan, Laney, Riley, and Joslynn Beard; Zane and Leia Garner; and Aaron and Patrick Beard, all who will miss their PaPa very much. William is also survived by two loving sisters, Marsha Carothers and her husband Ken; Ronda Eslinger and her husband Dan; his father-in-law and mother-in-law Charles and Phyllis Clark; three brothers-in-law, Loyd Boham; C.T. Clark and his wife Brenda; and Randy Clark; his sister-in-law Julie Wilkinson and her husband Keith; and other loving family and friends. In lieu of flowers, the family asks that donations be made to Ozark Christian College in memory of William Beard at occ.edu/donate or by mail to: Ozark Christian College, 1111 N Main Street, Joplin, MO 64801. Donations will be used towards a scholarship fund for non-traditional ministry students, who like Bill, are answering a life-changing call into ministry. Remembrances may be shared with the family at www.marshallfuneralhomes.com.

Memorial services for William Otto Beard will be 11:00 a.m. Tuesday, September 4, 2018, at the Driftwood Christian Church with Rev. Eddy Bob Mathews and Mark Berry officiating. He was cremated at his request and there will be a visitation with... View Obituary & Service Information

The family of William Otto Beard created this Life Tributes page to make it easy to share your memories.

Memorial services for William Otto Beard will be 11:00 a.m. Tuesday,...

Send flowers to the Beard family.