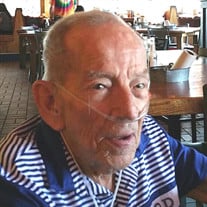 A memorial service for William Harvey Nighswonger, will be held Saturday, March 24, 2018, at 11:00 a.m. at the Marshall Funeral Home Chapel with Rev. Aaron Wagner officiating. William Harvey “Bill” Nighswonger passed away December 2, 2016, in Selah, Washington. He was born March 24. 1930, the child of Harvey Pinkerton “Pink” and Cora Demler Nighswonger, on his parents’ Woods County farm, 14 miles northwest of Alva. He attended Greenleaf Elementary School and was a 1947 graduate of Alva High School. Bill grew up during the Depression, surrounded by loving family and neighbors. One Christmas, he and his brother, Jim, received one bicycle and one basketball. even though there were two of them. They would take turns, one of them running and the other riding the bike to school. Bill learned to work hard for everything he had. Upon his father’s death when Bill was only 16, the family moved to Alva. After a few college courses, he joined the U.S. Army and was deployed to Korea with the 45th Division Signal Core, where he fought with a group of men from Alva. He always recalled the cold in Korea, being under direct fire, and all the rice, which he refused to eat the rest of his life. On August 22, 1954, Norma “Jean” Meyer became his bride and in 1955 he completed his bachelor’s degree in biology at NWOSU. Later, he earned a master’s degree in public health from the Tulane School of Medicine in New Orleans. Bill had a long career in government public health service Center for Disease Control, eventually being promoted to a rank equaling commander in the US Navy. He and his family moved to a different state every two years. Bill was onsite for health concerns at disasters and for disease outbreaks all over the United States. After retiring in 1980, he worked several jobs as a consultant in his field. He and Jean enjoyed retirement on their acreage north of Blanchard, Oklahoma, raising a garden and traveling. Bill was a devoted lover of dogs. He had many friends, and always had a good time whereever he was, especially when fishing, playing cards or bowling. He was a long time member of the Lions Club. Preceding him in death were his parents and two brothers, Fred and Jim Nighswonger, as well as his wife, Jean, who died in 1998. He is survived by his daughter, Pam (Ed) Moore of Selah, Washington, and daughter, Dr. Dana Nighswonger, DO, of Albuquerque, New Mexico. At his request, he has been cremated and his ashes will be buried beside his wife in the Alva Lutheran Cemetery.

The family of William "Bill" Harvey Nighswonger created this Life Tributes page to make it easy to share your memories.

A memorial service for William Harvey Nighswonger, will be held...

Send flowers to the Nighswonger family.