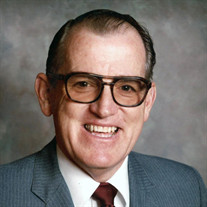 Memorial services for William Walter Bishop, Jr. will be 2:00 p.m. Saturday, October 22, 2016, at the Freedom Christian Church with Pastor Mark Kinkel officiating. The services are under the direction of Marshall Funeral Home of Alva. William Walter, Jr. son of the late Ruby and Walter Bishop was born March 3, 1931, and passed away September 28, 2016, at the age of 85 years, 6 months, and 25 days. Walter began his education in the Freedom School system and graduated with the Class of 1949 and began classes at Northwestern Oklahoma State University that fall. He then joined the 45th National Guard, served in Japan and Korea and was discharged on July 1, 1952. On August 17, 1952, Walter married Wanda Lee Barnes and began college at Northwestern as a sophomore and graduated with a degree in chemistry. They moved to Norman to finish his Masters Degree at OU. Upon graduating they moved to Orange, Texas, where he worked for DuPont. They then moved to Garland, Texas, where he worked at GEC where he helped develop the first Vidicon that took the first pictures of the moon. In Garland is where they adopted their two children. His career took him to St. Louis, Chicago and Tulsa. In Chicago he served as Scout Master 4 years. He was a member of Forrest Park Christian Church in Tulsa where he was an Elder and a member of the choir. In retirement he had an emu ranch near Claremore. He served on the American Emu Association board and held other offices. He taught Chemistry at the Tulsa Community College His wife and children still live near Claremore. Besides his parents, he was preceded in death by his brother Don Bishop and his brother-in-law, Ben. Walter is survived by his wife, Wanda; his son, Bill and his wife, Debby; his daughter, Tricia Wycoff and husband, Russell; his sister Nita Benson; four grand children, Allison Winslow of Ohio, Nick Winslow of Kansas, Cody Bishop of Oklahoma and Krysty Bishop of Oklahoma; other relatives and friends. Memorial contributions may be made through the funeral home to the Freedom First Christian Church.

Memorial services for William Walter Bishop, Jr. will be 2:00 p.m. Saturday, October 22, 2016, at the Freedom Christian Church with Pastor Mark Kinkel officiating. The services are under the direction of Marshall Funeral Home of Alva. William... View Obituary & Service Information

The family of William Walter Bishop Jr. created this Life Tributes page to make it easy to share your memories.

Memorial services for William Walter Bishop, Jr. will be 2:00...

Send flowers to the Bishop family.