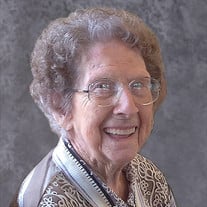 A Celebration of Wilma’s life will be held at the First Baptist Church in Waynoka at 2:00 p.m. on June 30, 2019, with Pastors Paul Jones and David Shaw officiating. Wilma Lorene Quinn, daughter of the late Emery and Hazel (Thompson) Quinn, was born June 30, 1917 near Hopeton, Oklahoma, in Woods County and passed away at Mooreland Heritage Manor, in Mooreland, Oklahoma at the age of 101 years, 11 months and 21 days. Wilma spent the early part of her life in the vicinity of Hopeton, Oklahoma, where she attended the Hopeton Pilgrim Holiness Church. On July 6, 1935, she was united in marriage to Dale William Percival in Hopeton. In 1946, they moved to Waynoka, Oklahoma, where she attended the Church of God and accepted Jesus as her Lord and Savior. In 1956, she was united in marriage to Clayton Lewis Milledge at Alva, Oklahoma. She worked for 19 ½ years as a Med Aide at the Waynoka Nursing Home. Wilma was a member of the First Baptist Church. Wilma was preceded in death by both parents, brothers Melvin and Delbert Quinn, sister Mildred Ferguson, sons Ronald Laverne and Gale Dean Percival and stepson Donald Cravens. She is survived by sons Ronald Milledge and wife Marie of Pauls Valley, Oklahoma, Larry Milledge and wife Gayla of Waynoka, Oklahoma, and stepson Lewis Milledge and wife Debbie of Waynoka, Oklahoma. Grandchildren are Eric Milledge and wife Stephanie of Glasgow, KY, Emily Smith-Dunn of Waynoka, Oklahoma, Joshua Milledge and wife Courtney of Newcastle, Oklahoma, Rebecca Underwood and husband Gary of Muskogee, Oklahoma, Mark Martinez and wife Miranda of Enid, Oklahoma, Matthew Milledge and wife Anna of Waynoka, Oklahoma, Autumn Gulliford and husband Trent of Fairview, Oklahoma, Lori Robinson and husband Jay of Wellington, Kansas, and Scott Percival and Amber of Wichita, Kansas. Sixteen great grandchildren and eight great great grandchildren, as well as a host of family and friends too numerous to mention. n lieu of flowers you may donate to First Baptist Youth Program in memory of Wilma Milledge.

A Celebration of Wilma&#8217;s life will be held at the First Baptist Church in Waynoka at 2:00 p.m. on June 30, 2019, with Pastors Paul Jones and David Shaw officiating. Wilma Lorene Quinn, daughter of the late Emery and Hazel (Thompson)... View Obituary & Service Information

The family of Wilma Lorene Milledge created this Life Tributes page to make it easy to share your memories.

A Celebration of Wilma’s life will be held at the First Baptist...

Send flowers to the Milledge family.