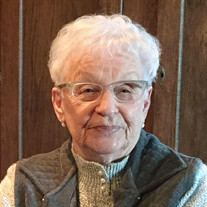 Funeral services for Winifred Lee Allen will be 2:00 p.m. Thursday, March 23, 2017, at the Dacoma Church of God with Pastor Connie Kinnard and Jonathan Gilliland officiating. Interment will be in the Pleasant View Cemetery under the direction of Marshall Funeral Home of Alva. Winifred Lee Allen, daughter of the late Ray V and Pearl Elizabeth (Ikler) Morse, was born December 16, 1928, in Dacoma, Oklahoma, and passed away March 19, 2017, at Oklahoma City, Oklahoma, at the age of 88 years, 3 months, and 3 days. Winifred graduated from Dacoma High School. On May 25, 1949, she was united in marriage to Dale Wayne Allen at Cherokee, Oklahoma. She lived in Dacoma until moving to Medford four years ago. She was a member of the Dacoma Church of God and attended the Baptist Church in Medford. She was an avid Thunder fan and adored her grandkids and great grandkids and all their activities. Besides her parents, she was preceded in death by one brother, Donald Morse, and 2 great granddaughters, Alli and Brynn Lamle. Winifred is survived by three daughters, Rita Lamle and husband, Ken, of Medford, Debbie Settle and husband, Larry, of Garden Plain, Kansas, and Patricia Settle and husband, Troy, of Edmond; three brothers, Charlie Morse of El Paso, Texas, Wayne Morse and wife, Joan, of Enid, and Max Morse of Lahoma. Also surviving are eight grandchildren, Lana Cecil and husband, Jason, of Leander, Texas, Blake Lamle and wife, Crystal, of Shattuck, Lacy Moore and husband, Gregg, of Woodward, Shea Settle and wife, Trisha, of Ponca City, Lindsay Henry and husband, Chris, of Kremlin, Lara Kostka and husband, Corey, of Kingfisher, Leia Laird of Edmond, and Lori McDaniel and husband, Scott, of Springtown, Texas; eighteen great grandchildren; other relatives and friends. Memorial contributions may be made through the funeral home to the Pleasant View Cemetery Association.

Funeral services for Winifred Lee Allen will be 2:00 p.m. Thursday, March 23, 2017, at the Dacoma Church of God with Pastor Connie Kinnard and Jonathan Gilliland officiating. Interment will be in the Pleasant View Cemetery under the direction... View Obituary & Service Information

The family of Winifred Allen created this Life Tributes page to make it easy to share your memories.

Funeral services for Winifred Lee Allen will be 2:00 p.m. Thursday,...

Send flowers to the Allen family.